Awesome place to hang out and talk about Seiken Densetsu stuff!
http://www.seikens.com/board/

Page 1 of 4
by Son
Anyone see this yet? I found this on the official Japanese Square Enix website

Yep...that's right. After all these years we get a remake!...on mobile phone... At least that's what I can gather from what I've read.

Now, that's cool and all, and I like how the art looks somewhat (would have preferred a more medieval look), but remember that mobile phone games are big in Japan. There's no garuntee we'll get it here, and even if they send it over not many people will play it because it's on mobile. I mean, I don't know very many americans who have a cell phone that can play these games (not saying not everyone in America has one).

I'm crossing my fingers that they will port it to DS eventually. And I HOPE they do not butcher it. They should do what they did with chrono trigger...LEAVE IT A LONE. Keep the graphics, maybe fix up the translation and battle system a bit, maybe add extra orbs or weapons, and add extra levels/side quests or put in what they took out when they cancelled the CD project.

Even if people say this game will suck...I will still get it. I mean I hated playing Dawn of Mana, but I loved the story and the music, so I still got it.

I'm currently trying to find any signs of screen shots or teasers.

Any thoughts?
by nick912012
Yeah, pretty much everyone here knows bout it, but I dunno why nobody made a topic on this =P

Yeah, I'm pretty stoked about it. Obviously, I'm not going to get it, but I'd love to see some promo artwork for it like the one they showed.


or put in what they took out when they cancelled the CD project.

That's exactly what I want.
by manaman
Hey,

Thanks for the thread, but this was front page news on this site.

I'm really wondering how they're going to do it. I know they released FFA on mobile, but SoM seems so much bigger and more complex.
Maybe they'll break it into parts? I dunno the Kanji on the pricing page but one of them seems to suggest that, I dunno though.
by manaman
Hey Sheexy,

Wouldn't that take away the non-linearity of the game? If that is the case, I'd forget all about this one.

manaman
by Dr. Sheexy
Yeah it really would, that's one of the reasons it's confusing me. XD
by Quemaqua
Do we really think we'll even get it over here? That version of FFA never crossed the ocean, did it?

Either way, I'd love to see something new, even if it's something old, you know?
by DeadWolf
We should hope for SD3 Mobile.

There is a Final Fantasy 4 mobile game that was ported over to WiiWare. Could happen with a classic mana game.
by Quemaqua
Actually, I'm not really hoping for mobile anything. I don't even own a cell phone anymore and rather hate the loathsome things. Wouldn't mind seeing SD3 pop up on DS or PSP or something, though. Even Wiiware would be better than nothing.
by Tomnet
I've just seen/learnt that and it will be like FoM : Very beautiful, hope to see more pics !.
As someone say, it I don't into mobile games too, I know in japan mobile games are very popular, but...only play on japanese mobiles :(

So I don't know if they're planed to reissue a SD on DS, but it will be a great idea if it's really good realized !
Normally if they follow what they are doing it should be the next? Hooooope to see it on DS !
by DarthDude
I may not play this, but I would like to see what it would look like playing the game on a mobile phone.
by Rabite
If they make all the changes similar to what they did with Sword of Mana, then Japan can keep this one. If it's close to the original I want to see this on either a console or a handheld then get a US release.
by Popoi108
Images here.

It seems more like a port than a remake.
by Kassidy
Thanks for the images. They have made the sprites crisper though, and also changed Salamando's appearance to bring him in-line with later games. Also the face sprites appear to be more detailed.
by Dr. Sheexy
Double check those sprites, they've pretty much redone everything.


Click the links if it won't show the images right, I guess they got mad at me for hotlinking.
http://www.1up.com/media?id=3757665&type=lg 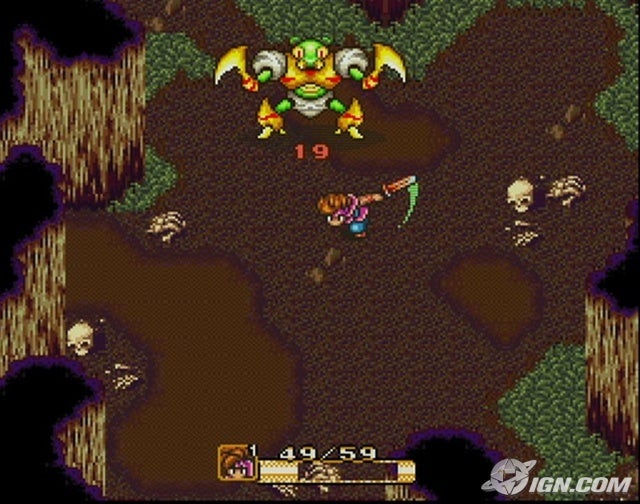 The Mantis Ant fight looks pretty much the same, just the grass is more detailed and the bones are flipped and some are changed, the rocks are also remade.
The baddies are using the more recent redesigns most noticable in the Buzz Bee where it's using a completely different looking enemy design. It's kinda similar to the SD3 and later Assassin Bugs, but it's still pretty different from those.
Pretty much all of the enviornments are heavily redone. Looks like Gaia's Navel has some clouds reflected in the water too.
Also on the Ring Menu it makes the selected item big, didn't do that in old version.

Also look at Purim in the first two pictures, character sprites are definitely updated too.


I made this comparison image too: