I have a miniature team working on a small ORPG hobby project titled Dragon Quest: Epics~ It is based on the Abel Yuusha anime, but all materials (art, music, voices, writing, etc.) are made from scratch.

Planned Features:
Turn-based Battles (waiting for source code to release so I can work some C# magic XD)
Alignment System (affects NPCs relations, factions, quests, and more - rudimentary system starting to take shape)
Choose to be Evil, Good, or Neutral right from the start and then eke out your own path as the game progresses.....
Choose between Estark, Jewel Monster, or Human races
Housing (rudimentary housing in place, trying to flesh it out so players can craft houses, buy, and rent, etc.)
Classes and Jobs
Battle Skills and Life Skills (playing music will be a thing! like bards and stuff? sometimes the skills will intertwine between life and battle)
Crafting (smithing, herbalism, tailoring, the works~)
Evolving Storyline (players choices will matter! Some of the canon major characters - personed by admins - will take place in one-time events in which players can sway the history of the world - so heavy RPing is to be expected)

Basically think a lite ver. of a game like Mabinogi, with a Dragon Quest basis to it? Yep.

Currently: Making our resources to go in-engine (using Intersect Engine btw) and setting up preliminary things such as character creation and GUI. <3 And testing out the basics of some of our planned systems. I've chosen to sorta of work on housing for now. Since it was a big "feature want" of the playerbase.

How's the art style?: The character creator pieces are done for the most part. Here's just a tiny example of an NPC wearing a special slime cap.

The backgrounds are a bit more "painterly" but I'll have some scenes to show later. I'm having to work in layers and get the fringes and such just right! I was waiting on my musician to give me some pieces as I work better at making maps if I have music to set the mood per place. :'3

(I'm not a fan of much DQ styled music, sorry, so I got an artist whose musical melodies I am more fond of. XD)

What's your role?: I oversee the whole thing. Been working on a website where you can get updates about our games and not just this one hobbyist project. XD For this game specifically I am also lead eventer and I have been learning C# by taking Unity engine courses so that when Intersect's code is released, I can possibly knock heads together with an extra programmer to fill out the major change - that battle system! I also do the non-sprite character arts/animations. You can see a sketch of mine here. I do like to do arts. 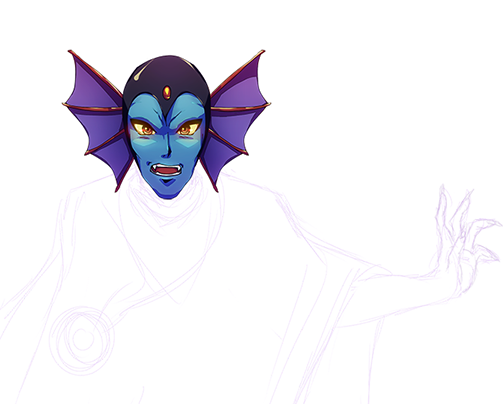 Looking for help?: Always. Even for those who just throw in ideas! You can say here if you'd like to help out with this particular project. <3
Top

Yohoho, been working in-engine finally putting the Official Theme to the character creation section now that the guy has given me it. It's pretty epic and you can hear it here: https://exias.bandcamp.com/track/opening

I still don't have a screen yet since I'm working on revamping some of the UI within the engine, especially cause there's still no source code to work with to get it to do exactly what I want. *cries real tears* I basically am trying to make it look the best I can using eventing techniques, but yeah. Hopefully video demonstration soon-ish. I do have a bit of "animated OP" done up too to the theme, which carries over into chara creation. Just for hype I guess. *shrugs* Gives me something more to do while others do their stuff and/or if I get stumped and need a short break from eventing.

My main pixel artist is still out of commission. So all I can do is work with what I got (I can do pixels but afraid I won't be able to match his artstyle). Anyways, I hope you like that music update at least? Again my contact is open if you wanna help at all. ^^
Top

That sketch is awesome, you certainly have some talent!
Top

Sadly cause I have to manage and oversee things I don't get to work on my art skill and animation skill enough to level them up recently. Disabilities prevent regular practice too, but I try. Art just takes me awhile. I'm determined to get gud! But thanks. Maybe you'll play this lil fan MMORPG when we're in a testable stage~

If you got any ideas of what you'd like to see in such a game, we always take suggestions!
Top
Post Reply
4 posts • Page 1 of 1