Hey Nedliv, is that a rabite pendant under the mousepad?
Top

That was Tomnet's and yeah, it's a little Rabite pendant.

They came out with LoM and were given out through raffle draws or something. They used to be pretty common but not so much anymore.
Top

Oh my... You all are great collectors!

I have only Legend of Mana (the best game I`ve ever played) and OST.

P.S. I wanted to buy SoM and Secret of Mana, but all Snes and those games were complitely sold 5 years ago. That`s terrible, because any "things" like Ebay are closed for Russia (I do not know why). I had only two ways - to go to Japan (or another country) and buy SoM, or to stay at home, access the WWW and download ROM`s. So did I. Now I play Secret of Mana on my PC with my joystick (Firestorm). (But LoM is better, I don`t know. Maybe I say that because I have played in it for 5 years non-stop ^^. I`m not a Zombie! ^^).
I did with rom`s something - I (rec on disc/ burnt to disc - please tell how to say it in a right way) them and made a DVD-box. Just look:

I think it`s better to keep them.
Top

Res > Your LoM is strange, never saw this cover, is this a Russian edition ?
Top


anyway got it all nice and organized again, with a Foo Dog to guard it for me.

It's been a long time since I posted anything, but I felt like updating on this

Last time I said I don't have anything other than my pride for completing SD3 for 11 times. But at some point, eBay happened

^An overall pic of my small collection

Most of them are SwoM stuff. I really love that game, despite the crappy gameplay. I love it's art, music and story.

^A yonkoma comic book of SwoM. You can get most of the jokes even if you don't read japanese.

^Piano sheets for music from FFA, SoM, SD3, LoM and DoM. I even actually use it.

^Shinyaku Seiken Densetsu Kaitai Shinsho - a complete game guide for SwoM, along with some artwork. I'm not even using it, I just wanted it

And art is always <3

^Two novels that cover the story from SwoM and has some awesome artwork too. One day, I'm going to be able to read them! Thank god they have furiganas (little kanas next to kanji, to help children and sometimes foreingers) but only partly, though. I'm going to have to learn the easiest kanjis, at least

^Pandora's Vox - A SoM doujin CD I've wanted for years, and finally got my hands on it

The remixes are awesome, and it was worth getting even for just the cover art. The latter is even more true to the next one:

^Pandora's Vox 2 - A SD3 doujin CD I've wanted even longer than the SoM one. Missed it on eBay but finally found one copy from some japanese web shop. It's name was Rakuten, I think.

Then there's also my copy of HoM, but I didn't bother taking a picture of it alone, it's just the game itself, after all.

There's one thing I also want, though I don't even know if it exists - A HoM artbook or a game guide that has art of all the characters in it. Does someone know more about this?
Top

Hey !
Already ten years after the opening of this thread I'm still here for posting some new stuff with the new Secret of Mana
Have a look :
Since fews days : 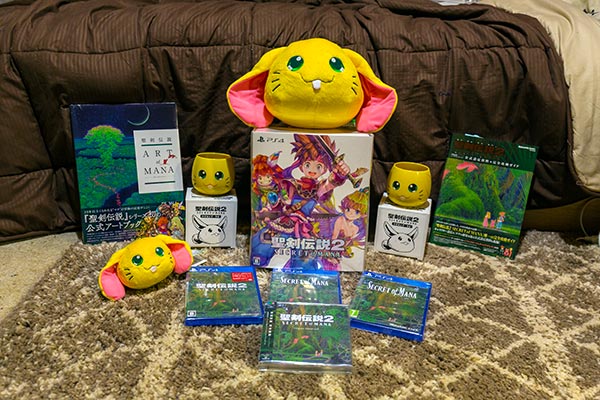 Since a few months : 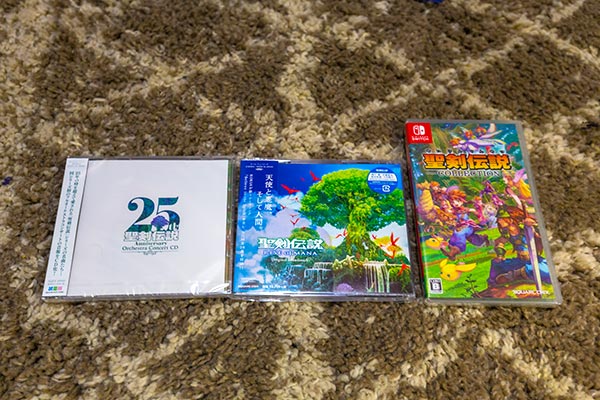 Great to see you're still collecting stuff.
I've kind of shifted away from the games etc, and just grabbing stuff like Rabites and things.

I need to post some of the neat new stuff I have, you gotta get the giant Rabite to go with those other big Rabites, it's so big it's crazy.

Maybe I'll get some photos sometime in the next year or so haha.
Top

Hey Sheexy !
I finally found the big Rabite and...oh yeaah it's big ! It's very nice in the collection

I also found the Secret of Mana Puzzle. It's great

But I've to do it now haha.
Top

Moving soon and I've just realized 30% of my stuff is Mana related, most of the rest is clothes or statistics books...

You can't see them, but there are about 7 more plush rabites in that box, no joke.

I'll get some pictures of the collection once I unpack at a new place.
Top
Post Reply
132 posts